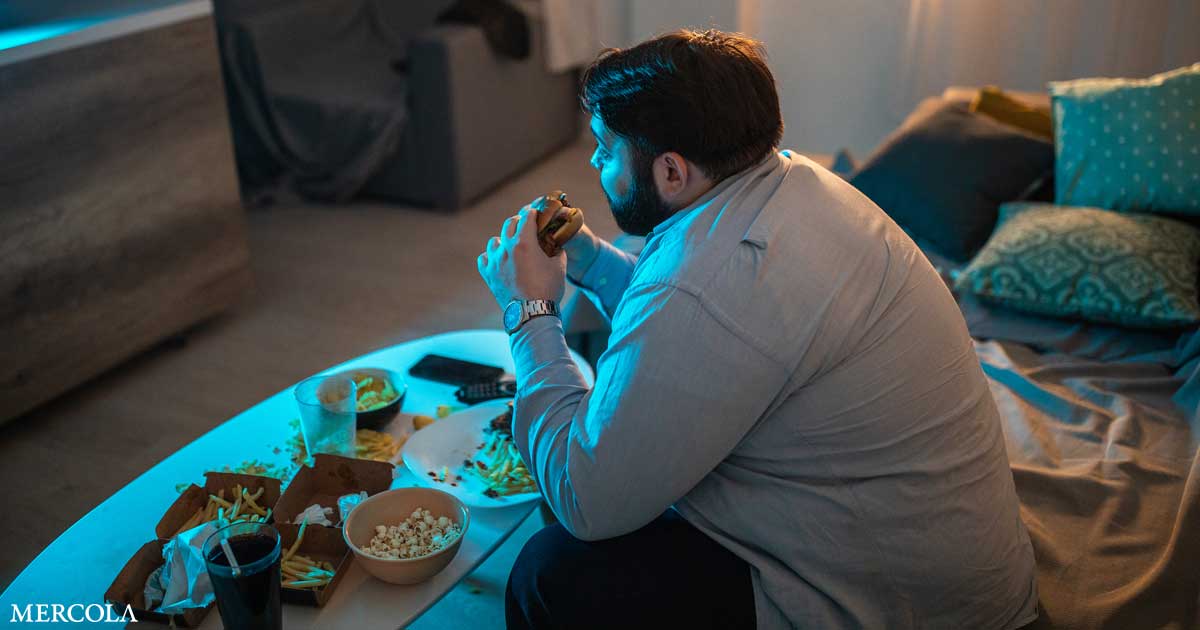 What’s behind this ongoing rise in Americans’ weight is the burning question — one with a complex answer. Everything from endocrine-disrupting chemicals, known as “obesogens,” in the environment3 to chronic stress4 and lack of sleep5 affect fat deposition and weight gain in the human body.

However, the consumption of ultraprocessed foods, which make up 57.9% of the average American’s caloric intake,6 are a likely culprit. The link between processed foods and obesity has taken on new meaning during the pandemic, as even mild obesity may raise the risk of COVID-19.

In fact, patients with mild obesity had a 2.5 times greater risk of respiratory failure and a five times greater risk of being admitted to an ICU compared to non-obese patients, according to researchers from the Alma Mater Studiorum University of Bologna in Italy.7 As such, calls have been made to tackle the pandemic by targeting junk food.

Why Processed Foods Are a Key Obesity Culprit

Ultraprocessed foods include items like breakfast cereals, pizza, chicken nuggets, soda, chips, salty/sweet/savory snacks, packaged baked goods, microwaveable frozen meals and instant soups and sauces. They’re high in sugar, and a high-sugar diet will take a toll on your health by packing on unwanted pounds at a remarkably rapid rate.

As noted in the BBC program The Truth About Sugar, drinking three cups of tea or coffee per day with 2 teaspoons of sugar added to each cup can result in a 9.9-pound weight gain (4.5 kilos) in a single year, provided you don’t increase your physical activity to burn off the extra calories.

When you consider that most consume five or six times more added sugar than that each day, it’s easy to see how obesity has become more the norm than the exception. Yet, sugar is only one problem with processed foods. Another, which may be an even worse offender than sugar, is industrially processed seed oils, often referred to as “vegetable oils.”

Nine years of research and investigation have led Dr. Chris Knobbe, an ophthalmologist, to conclude that chronic diseases like Type 2 diabetes, age-related macular degeneration, heart disease and cancer, are being driven by nutrient deficiencies and toxicity, caused by processed foods.

The root of the problem lies in mitochondrial dysfunction, which is caused by the excessive consumption of a Westernized diet, including toxic industrially processed seed oils, refined flour, refined added sugars and trans fats.

In a presentation at the ALLDOCS 2020 Annual Meeting, Knobbe cited data that found the obesity rate in the 19th century was 1.2%. By 1960, it had already risen to 13% — an 11-fold increase — and continued to climb steadily to this day.

“Obesity is on target to be 50% of adults obese in the United States by 2030, half obese,” Knobbe said. “So the increase looks something like … a 33-fold increase already in 115 years.” He continued:8

“Again, you have to ask, you know, what accounts for this … All right, well, let’s go back to the dietary history now. So you’re going to see westernized disease correlate to modernized diets. That’s the theme of this, essentially …

And I will submit to you that this has really been a global human experiment that began in 1866, it didn’t begin in 1980, you know, with our low fat, low saturated fat dietary guidelines, it began in the 19th century and nobody gave informed consent of us. Not none of us knew what we were getting into and most of us still don’t.”

When you consume an abundance of ultraprocessed foods, it’s not only a matter of taking in “empty calories” or too many calories that cause weight gain. It actually triggers a catastrophic cascade of health declines rooted in mitochondrial dysfunction and insulin resistance.

At the root of the harmful biochemical reactions triggered by seed oils is linoleic acid, which is an 18-carbon omega-6 fat. Linoleic acid is the primary fatty acid found in PUFAs and accounts for about 80% of the fatty acid composition of vegetable oils. Omega-6 fats must be balanced with omega-3 fats in order not to be harmful, but this isn’t the case for most Americans.

To make matters even worse, most of the omega-6 people eat has been damaged and oxidized through processing. Knobbe explained the complex process in his presentation:9

“Here’s what excess omega-6 does in a westernized diet: induces nutrient deficiencies, causes a catastrophic lipid peroxidation cascade, is what this does … This damages … a phospholipid called cardio lipid in the mitochondrial membranes. And this leads to electron transport chain failure … which causes mitochondrial failure and dysfunction.

And this leads first to reactive oxygen species, which feeds back into this peroxidation cascade. So you’re filling up your fat cells and your mitochondrial membranes with omega-6, and these are going to peroxidize because of the fact that they are polyunsaturated.

All right, next thing that happens, insulin resistance, which leads to metabolic syndrome, Type 2 diabetes, nonalcoholic fatty liver disease. When the mitochondria fail you get reduced fatty acid, beta oxidation, meaning you can’t burn these fats properly for fuel.

So now you’re … carb dependent and you’re heading for obesity. So you’re feeling tired. You’re gaining weight. Your mitochondria are failing to burn fat for fuel … this is a powerful mechanism for obesity.”

In his most recent book, “The Case for Keto: Rethinking Weight Control and the Science and Practice of Low-Carb/High-Fat Eating,” journalist Gary Taubes explains how carbs and fats affect your body, and why replacing unhealthy carbs with healthy fats is so important if you’re trying to control your weight and/or blood sugar.

In our 2021 interview, he also explained that the obesity epidemic can be linked back to a Western diet rich in refined sugars and grains. Whenever sugar and white flour are added to a population’s diet, regardless of what their baseline disease rate is, you eventually end up with an epidemic of obesity and diabetes.

Yet, Taubes estimated that some 98% of the conventional nutrition and obesity research community still approach obesity as an energy balance disorder, when it’s actually related to the type of food we’re eating:

The good thing about cutting ultraprocessed foods from your diet is that doing so eliminates not only excessive amounts of refined sugars and grains, but also the omega-6 linoleic acid that’s abundant in seed oils.

Nearly every fast food restaurant is also guilty of using high levels of these toxic fats, along with high amounts of refined sugar and grains. This is why it is so important to prepare as much of your food as you can in your home so you can know what you are eating.

Some of the damages caused by processed foods have gone mainstream, as it’s become clear that obesity plays a role in COVID-19 deaths. London-based cardiologist Dr. Aseem Malhotra is among those warning that poor diet can increase your risk of dying from COVID-19 via its role in obesity and related conditions.

He tweeted, “The government and Public Health England are ignorant and grossly negligent for not telling the public they need to change their diet now.”10

He told BBC that ultraprocessed foods make up more than half of the calories consumed by the British, and if you suffer from obesity, Type 2 diabetes and high blood pressure — all of which are linked to poor diet — your risk of mortality from COVID-19 increases 10-fold. Journal of Virology researchers agreed, writing:11

“Over the years, humans have adopted sedentary lifestyles and dietary patterns have shifted to excessive food consumption and poor nutrition. Overnutrition has led to the constellation of metabolic abnormalities that not only contributes to metabolic reprogramming but also limits host innate and adaptive immunity.

Prime minister Boris Johnson also believes that his weight made his COVID-19 infection more severe, and announced plans to implement bans on junk food ads online.12,13 More than a dozen states in Mexico have also decided to combat the pandemic by banning the sale of junk food to minors.14

In an editorial published in the BMJ,15 three researchers also cited the role of the food industry in driving up rates of obesity and ultimately causing more COVID-19 deaths:

“It is now clear that the food industry shares the blame not only for the obesity pandemic but also for the severity of covid-19 disease and its devastating consequences.

During the covid-19 pandemic an increase in food poverty, disruptions to supply chains, and panic buying may have limited access to fresh foods, thus tilting the balance towards a greater consumption of highly processed foods and those with long shelf lives …

Moreover, since the start of the covid-19 pandemic the food industry has launched campaigns and corporate social responsibility initiatives, often with thinly veiled tactics using the outbreak as a marketing opportunity (for example, by offering half a million “smiles” in the form of doughnuts to NHS staff).”16

If you’re overweight or obese, taking steps to optimize your weight will have far-reaching benefits on your physical and mental health.

This starts with what you eat, and I recommend adopting a cyclical ketogenic diet, which involves radically limiting carbs (replacing them with healthy fats and moderate amounts of protein) until you’re close to or at your ideal weight, ultimately allowing your body to burn fat — not carbohydrates — as its primary fuel.

This includes avoiding all ultraprocessed foods and also limiting added sugars to a maximum of 25 grams per day (15 grams a day if you’re insulin resistant or diabetic). KetoFasting, the program I developed and detail in my book, “KetoFast: A Step-By-Step Guide to Timing Your Ketogenic Meals,” combines a cyclical ketogenic diet and intermittent fasting with cyclical partial fasting to optimize weight, health and longevity.

Regular exercise along with increased physical movement during your waking hours is also important, as are getting sufficient sleep and tending to your emotional health. If cravings are an issue for you, the video above, in which Emotional Freedom Techniques (EFT) practitioner Julie Schiffman demonstrates how to use EFT to fight food cravings, can help.

Taken together, by addressing the emotional side of eating and swapping out ultraprocessed foods for whole foods, while staying active as much as possible, you’ll not only naturally lose weight but also propel your overall health in a positive direction.

The Impact of Billions of Microplastics and Nanoplastics on Human Health

5 unusual headaches: Signs to watch for and what to do – Harvard Health Blog

How Do Virus Variants Get Their Names?